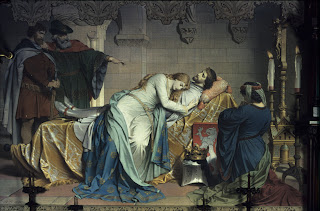 The Tristan legend was one of the most popular love stories told during the European Middle Ages. As well as inspiring poets, bards and writers the legend became a hugely popular subject of artists and craftsmen. Iconic moments such as the ‘drinking of the love potion’ and ‘the tryst under the tree’ were depicted in illuminations and murals as well as carvings, embroidery, and metal work.
Following the Arthurian revival, the legend was revisited by artists of all kinds and found itself explored in new styles such as surrealism, art deco, and the pre-Raphaelite way. Tristan and Isolde remain iconic characters in a much loved legend that continues to inspire artists and craftspeople today.
The Romance of Tristan and Isolde has had a long and varied literary history and has had a substantial impact on the development of Western literature since it first appeared.
The legend almost certainly originated in oral traditions that were built on extant traditions of figures, myths and folklore. Myths such as the Celtic "Pursuit after Diarmaid and Gráinne" and "The Wooing of Emer"; Greek "Theseus and the Labyrinth" and Persian "Wîs and Râmîn" have all influenced scenarios and themes within the Tristan legend.
These oral traditions born of local folklore and ancient myths and legends, along with subsequent dramatic embellishments, were eventually written down. Today, three early treatments of the legend have survived. However, due to their similarity, many scholars believe that these early versions may have derived from a single definitive composition hypothetically known as the "Ur Tristan", but this has been lost to us.

BACKGROUND
The original novel was written in French under the title "Le Roman de Tristan et Iseut".
It was translated into English by Hilaire Belloc.

Ever since having inspired bards and minstrels across Europe, the Tristan legend has regularly been featured in musical and cinematic works.
Probably the most famous instance of the legend to a modern audience is the opera "Tristan und Isolde" by the German composer Richard Wagner. This is one of his most highly praised works and is still popular today - being performed regularly worldwide.
Also familiar may be the 2006 film, "Tristan + Isolde" - a flashy Hollywood blockbuster starring James Franco and Sophia Myles. This is but the latest in a long line of films (both live action and animated) that have been inspired by the legend since even the earliest days of cinema.

ISOLDE THE FAIR
Isolde is the heroine of the Tristan legend and is most famous for being the star-crossed lover of Sir Tristan. A princess of Ireland, Isolde was married to King Mark of Cornwall. She fell in love however with Mark’s nephew: Tristan. Despite her bond to Mark, Isolde and Tristan could not be parted and they secretly committed adultery, resulting in a lifetime of sadness and a tragic ending.

LEGEND
As the daughter of the Irish King Anguish, she first meets Tristan when he comes to Ireland in disguise in order to be healed from a wound dealt by Isolde’s uncle, Morholt. She and her mother (also named Isolde) heal Tristan. Tristan later returns to Ireland to win Isolde’s hand in marriage to his uncle King Mark of Cornwall. O n their voyage from Ireland to Cornwall, Tristan and Isolde accidentally drink a love potion that was intended for Isolde and Mark. They fall helplessly in love and consummate their love on the journey. On her wedding night, Isolde substitutes her trusted handmaiden Brangaene in her marital bed in order to conceal her loss of virginity. She later tries to have Brangaene killed in order to hide the secret, but Brangaene is saved and the two reconcile.
After many further trysts, Mark comes to suspect the lovers and Isolde and Tristan are variously exiled and welcomed back to court in cycles. In the older version of the legend, Tristan, having been banished from King Mark’s court, marries another woman known as Isolde of the White Hands. He is mortally wounded and sends for Isolde the Fair to heal him once more. Isolde sails to Brittany, but Tristan’s wife tells him that Isolde is not coming, and Tristan dies. Isolde the fair dies of grief.
In the Prose Tristan and its derivatives, Isolde eventually flees from Mark’s court and resides happily with Tristan in Lancelot’s castle: Joyous Guard. Tristan is slain by a jealous Mark and then Isolde dies of grief.

PERSONALITY
Isolde has been recorded variously as a virtuous lady, embroiled by magic and her emotions in a tragic love triangle and a manipulative and cunning adulteress. Despite engaging in a sinful relationship however, most versions are sympathetic to her and her lover – favouring them over her ‘holy’ marriage to King Mark.
Isolde is renowned as being second -if not equal- in beauty to Queen Guinevere. She is noted also for being a healer of renown: in some versions only she can save Tristan from various poisons. She is often depicted as a quick witted woman. Her most famous example of this is when she swears upon God’s name that she had taken no man between her thighs but her husband and the poor beggar whom just carried her across the river on his back. In actuality the beggar was Tristan and Isolde was saved by God from burning irons and the suspicions of the court.